I was a 3rd Class Midshipman at Maine Maritime Academy when Vice Admiral Arthur K. Cebrowski and John J. Garstka put together this Proceedings article.  I had walked on to an NROTC program, buckled down on my academics and earned a scholarship.    I remember reading it and thinking that it was a bit of a “flashback” vice forward looking.  But that was mostly because I had grown up with these items.  I’d had the Atari, the Commodore 64, and even a suitcase 286 loaned to me to “play” with.  But having experienced much of what is talked about in the paper I encourage another review of the document.  I’ve put together a few of the items that I find most important to where the Navy has come with the Information Dominance Corps, where it has fallen short, and where it can work to overtake it’s missteps.

Admiral Jay Johnson said it is “a fundamental shift from what we call platform-centric warfare to something we call network-centric warfare.” This was operationally shifted effectively, however the man, train, and equip entity remained focused on providing platform-centric leaders (Aviation, Surface, Submarines).  I would argue that since the start of this decade, warfare we exercise has always been technology-centric but from the days of recognizing network as an enabler for Naval missions it has shifted from the network-centric that Cebrowski described to  information-centricty and this centricity is only becoming more prominent and identifiable. 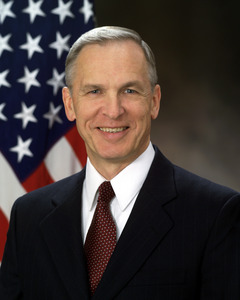 We’ve started to network everything (not well in some cases) but the information has become dominant.  The legacy platforms we still man-train-equip are becoming simple sensory platforms for the information-centricity in the global battlespace.
Intellectual Capital - “Information-based processes are the dominant value-adding processes in both the commercial world and the military. Yet the military fails to reward competence in these areas. “Operator” status frequently is denied to personnel with these critical talents, but the value of traditional operators with limited acumen in these processes is falling, and ultimately they will be marginalized, especially at mid-grade and senior levels. The war fighter who does not understand the true source of his combat power in such things as CEC, Global Command and Control System, and Link-16 simply is worth less than those who do. The services must both mainstream and merge those with technical skills and those with operational experience in these areas. These are the new operators.”
I don’t think I could come up with a better summation for why there is a push for:

Financial Capital - although the Navy made an effective transition into the network-centric era it has now allowed those networks to wane.  The sensors available to the U.S. Military are unable to reach the forces afloat as it would flood and exceed the capabilities of the supporting infrastructure.  While the corporate Navy looks for IT inefficiencies reduce costs the afloat forces require significant resources to bring them into the current generation of technology (again Big Navy and the U.S. Navy have always been technology-centric) in order to move the supporting information-centric element.

Transformation Process- The ponderous acquisition process remains; technology speed of advance has only increased.  I’ve heard more than 50 FO/GO and their equivalent civilian counterparts state this problem over the last 7 years and yet it continues to remain.  We own these rules - the U.S. Government and the Department of Defense.  Call it a Grand Challenge - we’ve seen the model that has worked for USSOCOM; make it the model for everything and move on.  We’ll find the issues with this new model and another, better model one will develop.

I want to ensure I’m not opposing an adversary in the future while worrying about a National Deficit in the $15 trillion realm.  I want this reduced, eliminated and operate at a surplus.

Let’s become the lender; Let’s return to be the global leader!

I’ve been in the Navy for a little more than a decade.  The one important thing I would share from my experience is to understand and embrace the art of expendable. Each day I quickly review the major ramifications if I was to simply have been expended. This expenditure can take forms in the shape of great opportunities, a too great a failure, or even a life tragedy. This art has significant ramifications not only in your professional career but even greater importance in your personal life.

In my professional life I’ve made it a priority to ensure that if I was simply removed from the command or mission progress toward success would not be hindered. This isn’t a new concept. The Army does it in the form of a 1-up-1-down relationship; learn the job of the individual who works for you and the job of the person for which you work. This will pay dividends and probably save someone’s life when things become chaotic. But rarely do I see individuals fully embrace this concept. Often they are concerned with trying to increase their importance in the organization. Believing that importance, holding key information, or having an irreplaceable skill will not make great. It will serve as a detriment to the organization, mission, or goal which you dedicated your time and portion of your life to assist and move forward. Ultimately that is what you’ve chosen to do; give part of your life to a cause. Why cloud it with foolish selfishness that negates the strategic contribution you are trying by your service?

My application of this art is through deep involvement with the people with which I’m privileged to work with. What I’ve found successful is to know your shipmates and leaders and to exploit their passion. Often that passion is to make a significant difference; a goal and desire much of us share. That desire can be served best if it is reminded that it is expendable. There will be someone to replace you no matter when that time comes. With this fuel you will be driven to achieve things to a level that the information hoarders and sole skill believers are unable to achieve. You’ll teach and train your subordinates to know and understand not only their roles but your role. Once you achieve this your people know their duties and yours. Combined together there is greater cohesiveness, camaraderie, and unity toward the organization’s goal. This new knowledge and ability allows them to foresee issues ahead of what they were able to before and mitigate them at their level. This foresight and mitigation the perpetuates through your level and the levels above you. This then allows strategic progress to be made within the organization.

The Navy, with some exceptions, has enjoyed a different level of security comfort compared to it’s boots on the ground sister services. While it has rigorously practiced it’s shipboard damage control; it’s ability to absorb blows in the form of inbound weapons and it’s affect upon the human capital has not been something trained to on a large enough scale to influence individuals within.  The last time this really had to be considered by the Navy is in World War II and the age of Fleet Admiral King.  That was a period almost 70 years ago and our organization and culture has forgotten the valuable lessons of that age.

One of my mentors made an impression on me by saying “A day will come when the Navy will determine it is finished with you; make sure you’re prepared for that day.” I find this statement to hold more significance today then when I first heard it several years ago. It motivates me, makes me hungry for more, and reminds me we’re all expendable.