The foundation of the paper is based upon an “Old Soldier’s” quote:

“Yours is the profession of arms, the will to win, the sure knowledge that in war there is no substitute for victory, that if you lose, the Nation will be destroyed, that the very obsession of your public service must be Duty, Honor, Country.” - General Douglas MacArthur [farewell speech to West Point Cadets in May of 1962]

The Chairman of the Joint Chiefs of Staff, General Martin Dempsey, starts out a recent America’s Military - A Profession of Arms White Paper that encourages us to “renew our commitment to the Profession of Arms” to continue to shape Joint Force 2020. 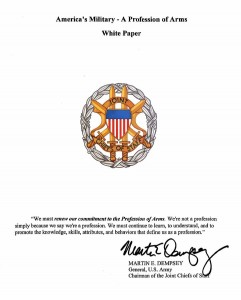 The Key components of the paper are:

I found that the Leadership as the Foundation section reflected my most rewarding experiences.  The necessity to build and maintain trust while inspiring others to achieve has always been the most rewarding for me personally.  This requires of the leader the ability to be an “expert at becoming an expert.”  I’ve found that the ability to learn and understand something faster than another individual allows me to lead and mentor others with more confidence and greater results.
The Way Ahead: Proficient in combat, security, engagement, relief and reconstruction.  Remain Responsive and Resilient!  Semper Gumby!
[via JCS]