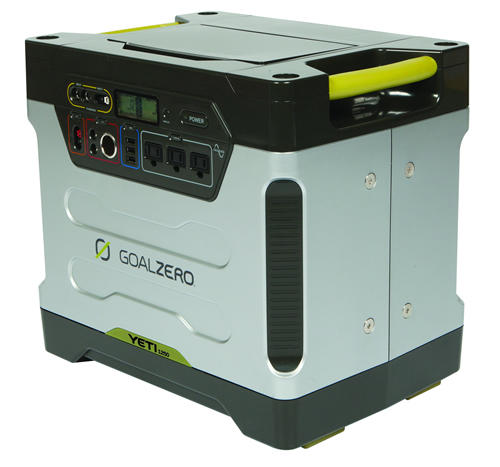 One of the great booths at the Consumer Electronics Show (CES) that I recently attended was Goal Zero’s.  It was an impressive display of great innovative solar based generators and energy storage products.  But the thing that really impressed me was the quality of their products and the knowledge and professionalism of their people.

This is Goal Zero’s Yeti 1250.  This sucker is powerful enough to power a full size refrigerator for multiple days among numerous other applications.  The great form factor and capacity are perfect for replacing a traditional generator.  I can see applications for this as a backup generator at home, on a boat or a perfect pack and go kit for a Humanitarian Assistance / Disaster Relief (HA/DR) mission.

I wish I would have had a few of these to take ashore with me in Haiti.  These would have made all the difference; so would all their other great products.  Imagine being able to chain several of these together (which can be done) and getting initial communications and vital survival needs the energy they require.  The bigger deal is the lack of infrastructure required to support the units.  No fuel required to be transported or protected.  Then once things are stabilized in that area pack up and move.  Again no need to rework an infrastructure or support plan.

Currently the best places to get one of these bad boys is:

Fifty Stars and Thirteen Stripes - 2012 State of the Union Address

Last night the Commander in Chief gave the 2012 State of the Union Address.  If you haven’t taken the time to watch you really should.  It was a reflection of a majority of his first term in office.  He laid out what has been accomplished through the recent difficult years for the country.  He also highlighted the good that American’s have done to improve things.  He went on to site the recovery and rebound of the Big Three, General Motors, Chrysler, and Ford.

He also pointed out that for the first time in 9 years the U.S. is out of Iraq, Osama bin Laden is no longer a threat, and that most of his deputies have also succumbed to some form of ballistic trauma.  All excellent results.

President Obama also noted the strategic reduction of our use of foreign oil.  He pointed out that our production was up tremendously as well.  Although good in this case to balance the strategic economic power oil plays the ultimate goal must be an overall reduction in use not only in the U.S. but globally.  He then proceeded to the initiatives by the U.S. Armed Forces for energy reduction and transition to renewable energy.  He specifically sited the U.S. Navy for their solar power progress.

The speech included a bit of inspiration, noted the vast challenges that still lay ahead, and provided an optimistic outlook that “America is back”.  Plenty lay in store for us in 2012.  Events unforeseeable, plans will unfold one way or another, and a election year will pass.  Will we have the same Commander in Chief next year?  One way or another it will be exciting no matter what.

Tagged with: energy • State of the Union • Strategic • U.S. Navy