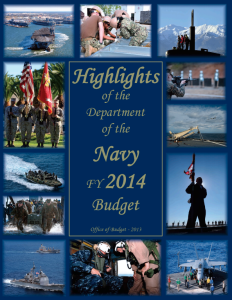 The FY14 Navy Budget Highlights Book sets the context by opening its first section with:

The Fiscal Year (FY) 2014 President’s Budget (PB) reflects a strategic direction grounded in the reality of the nation’s fiscal challenges. As we transition from today’s conflicts, we must position the Navy-Marine Corps team for the challenges of tomorrow.

Section I – Department of the Navy: Operating in a Fiscally-Driven Frontier

OPERATE EFFECTIVELY in CYBERSPACE and SPACE - The Navy created Fleet Cyber Command/Tenth Fleet to conduct full spectrum operations in and through cyberspace to ensure Navy and Joint/Coalition Freedom of Action. The Navy must organize, train, and resource a credible workforce of cyber professionals and develop forward-leaning, interoperable, and resilient cyberspace capabilities to successfully counter and defeat a determined adversary in cyberspace. The Navy’s ability to operate and maintain secure and reliable networks is critical to every warfare area and all aspects of daily operations. The Naval forces provide unique physical access to global cyberspace that can be operated remotely in coordination with national capabilities and operations. The Department will continue to work with allies and invest in additional capabilities to defend its networks, operational capability, and resiliency.

Department of the Navy Objectives (and resultantly the Section titles)

Total Obligation Authority (TOA) for the FY 2014 Department of the Navy baseline
budget is $155.8 billion.

Major elements of the FY13 budget include:

Education and Training - Today’s Navy is the most modern and technically superior Navy in the world. Our ability to outperform our adversaries on the sea, in the air, below the sea and on land requires a highly educated, trained, skilled, and disciplined force.

Emphasis on regaining technical expertise, depth, and business/contracting skills necessary to execute acquisition programs remains a priority within the Department. CYBER growth is commensurate with the demands of National Security priorities.

FY14 Navy Budget Highlights Book describes that the Department will maintain strong, agile and capable military forces. Operational readiness is the catalyst that brings naval power to bear whenever it is needed. Our budget supports requirements for our Carrier Strike Groups (CSGs), Amphibious Ready Groups (ARGs), and Marine Expeditionary Forces (MEFs) to execute the National Military Strategy and respond to persistent as well as emerging threats.

Section V – Investing Toward the Joint Force of 2020

The FY14 Navy Budget Highlights Book describes the shipbuilding budget funds, which are approximately $84.7 billion for 41 ships
across FY 2014 to FY 2018. 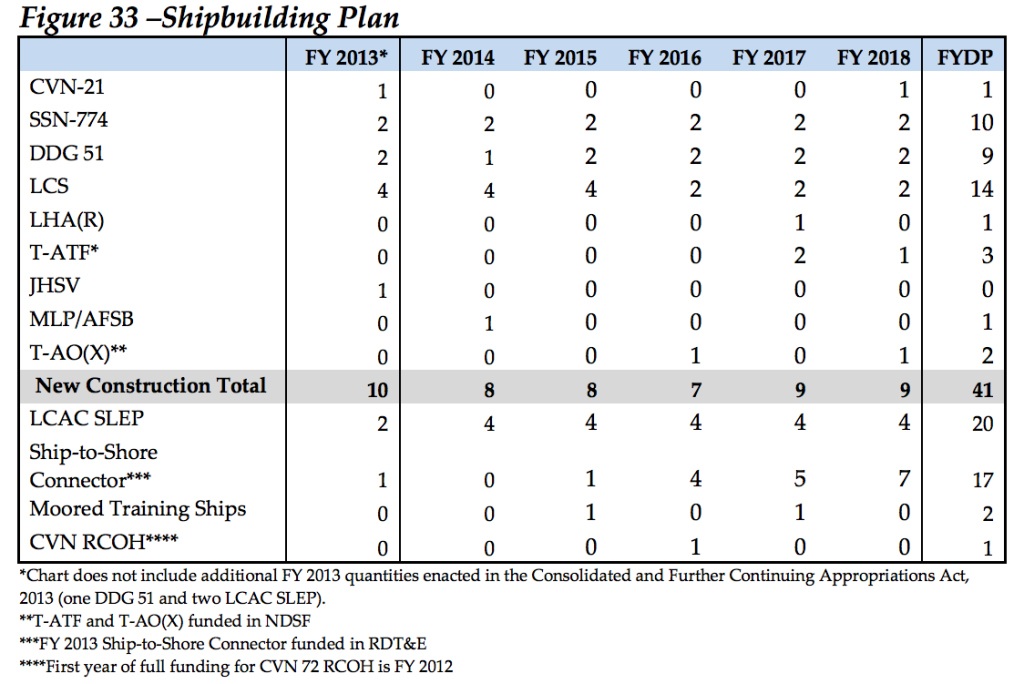 The FY 2014 budget continues to support the goal of transforming the force with unmanned vehicles by investing in a broad range of unmanned platforms in support of Joint Force and Combatant Commander demands for increased ISR capability and capacity. These programs support the warfighter by providing a persistent ISR capability through the continued development, acquisition, and fielding of UAV systems such as the MQ-8 Vertical Take Off and Landing Tactical UAV (VTUAV) and MQ-4 Triton UAS. Additionally, the Department is funding future unmanned development, including the technology demonstration of the Navy Unmanned Combat Aerial System (UCAS) X-47B and the Unmanned Carrier Launched Airborne Surveillance and Strike system development. 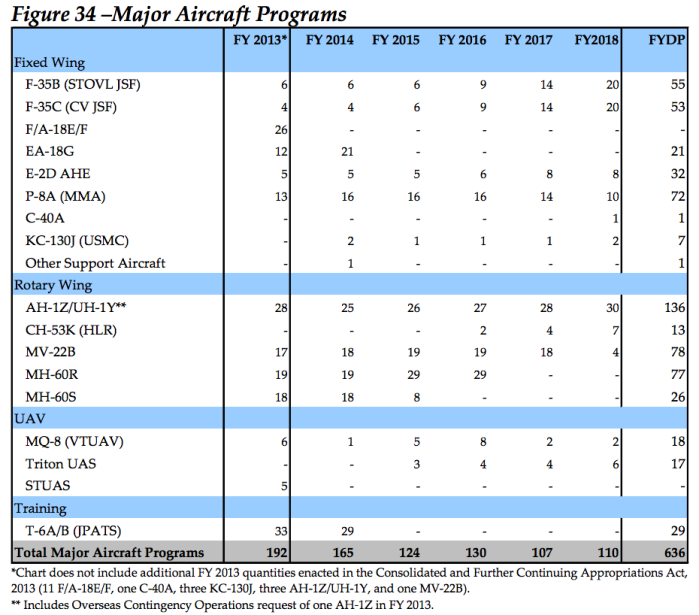 The Standard Missile (SM) program replaces less effective, obsolete inventories with the more capable SM-6 Extended Range Active Missile. The SM-6 high speed/ high altitude missile program started Full Rate Production in FY 2013. The SM-6 and its associated Naval Integrated Fire Control - Counter Air (NIFCA-CA) will provide the capability to employ these missiles at their maximum kinematic range. NIFC-CA exploits capabilities inherent in existing systems, optimizes current and emerging technologies in component system upgrades, integrates them together, and performs kill chain tests, forming an interoperable System of Systems to maximize future air defense capabilities. The Department of Navy has focused on its efforts to integrate the “From The Sea” kill chain consisting of the E-2D Advanced Hawkeye, CEC, AEGIS, and SM-6 missile. Investments in advanced technology such as the SM-6 and its associated NIFC-CA capabilities will enable the Navy to keep pace with the evolving threat and thereby continue to maintain our conventional warfare edge.

Described in the FY14 Navy Budget Highlights Book are the major acquisition programs which support the Plan to Achieving Information Dominance are as follows:

The Navy’s Command, Control, Communication, Computers, and Intelligence (C4I) programs are the backbone of naval combat capability. In concert with C4I, cyberspace capabilities are critical to achieving DON objectives in every warfighting domain and enterprise business model. The Department of Defense is undergoing a significant transformation in organization, structure, and alignment to enable the full range of operations in cyberspace. The associated cyberspace mission areas of computer network operations and Information Assurance will be enabled by common technologies and must be highly synchronized. DON is reducing information technology (IT) infrastructure cost and cyber vulnerabilities by consolidating Enterprise IT contracts and data centers, as well as improving IT governance.

The Next Generation Enterprise Network (NGEN) will improve upon the successes of NMCI. A significant distinction is that NGEN will ultimately be predominately government managed and controlled. NGEN management will be more centralized to support the computing demands of the DON enterprise, and fully aligned with and supported by the respective Navy and Marine Corps network operation commands. NGEN will support net-centric operations and position the DON for transition to the Naval Networking Environment (NNE) vision for FY 2016. NGEN forms the foundation for the NNE, and will be interoperable with, and leverage, other DoD-provided Net-Centric Enterprise Services.

The DON awarded the Continuity of Services Contract (CoSC), which began on 1 October 2010, to maintain the existing Navy Marine Corps Intranet (NMCI) network services and provide for the necessary transition support for migration to NGEN.  FY 2013 marks the planned transition of the CoSC to the NGEN contract. The FY 2014 budget supports the NGEN program.

Navy Multiband Terminal (NMT) is the replacement for existing protected and wideband military SATCOM terminals. The program provides Navy units with the ability to access the next generation of military SATCOM satellites. The system also provides increased capacity, mitigates service denial in a jamming environment and supports execution of the Ballistic Missile Defense mission. The common suite of equipment simplifies logistics support while reducing the footprint of equipment on space constrained ships and submarines. FY 2014 funds will support procurement of 45 units and the installation of 29 units.

Do you understand the different “colors” of Department of Defense funds?

*Preparation of this study/report cost the Department of Defense a total of approximately $1,399,000 for the 2013 Fiscal Year. This includes $71,000 in expenses and $1,328,000 in DoD labor.  This means that $71K was expended separately to create this report in conjunction with the financial data created from more than $1.3M in labor costs.

The video above gives you a small idea of the things that are available for you to capture and enjoy, with the GoPro Hero3 Black, as the price and size of HD video equipment continues to drop.  Pick up two of these and you can lock them together to make an 3D setup!  The GoPro Hero3 Black is available in several configurations but this is the top of the line GoPro Hero3 Black Edition for the best price I’ve seen, $339, since the insider offering at CES.  But this offering comes with the decent bundled items:

Add the GoPro Hero3 Black to your basket and get 20% Rakuten Super Points 6800 points with promocode - FLASH20 to get the price down to the discount to include free shipping. 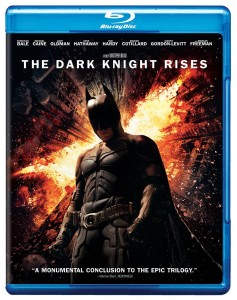 The Dark Knight Rises movie was filmed in Pittsburgh through the summer of 2011 while I was in Pittsburgh.  The Steel City provides ample and impressive architecture which was used throughout the film. I enjoyed every aspect of this vista as I ran the Pittsburgh Marathon in 2012.

The video of the film comes in 1080p MPEG-4 AVC (23.01 Mbps).  The audio supports the visual aspect of the movie with DTS-HD Master Audio 5.1 (48kHz, 24-bit).  For you streamers out there - you’re not getting this level of quality.  So if you are sporting any decent visual and audio equipment you are not getting the full value of that equipment by viewing it through streaming media at this point.

You might also think the ability to stream HD media is possible over a wireless medium.  While this remains true for more compressed formats the ability to live stream any of this full HD media (both video and audio) remains difficult without significant buffering.  The saturation of the Electromagnetic Spectrum is what is driving and others to delve rapidly into the White Space Spectrum.

With all this said - I recommend picking up The Dark Knight Rises movie Blu-ray for $11.49.