There have been some hard sailors in the service of the United States Navy but I’ve got to hand it to Lieutenant John Cushing Aylwin.  Having unofficially served in the British Navy for about 6 years as a Mate he later ended up in the out-manned and outgunned USN aboard “Old Ironsides“, USS Constitution.  He served aboard galently in the defeat of HMS Guerriere on 19 August 1812. 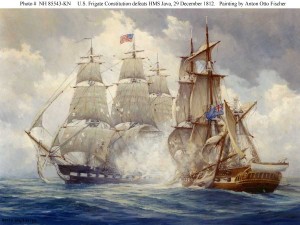 USS Constitution then ran across HMS Java on 29 December 1812 and LT Aylwin was severely wounded in the action.  I find his thoughts, having faced several intense actions, extremely valuable:

“I have too often looked death in the face to be afraid of him now.” - Lieutenant John Cushing Aylwin, USS Constitution’s Sailing Master

Most individuals are not aware that it is the 200th anniversary of the War of 1812; much of why it was fought has uncanny similarity to the Law of the Sea issues arising today. This is just one example of the individuals we celebrate on the United States Holiday “Memorial Day”.