I found this little nugget of awesomeness on an individuals Facebook (NASDAQ: FB) page who I spoke with this morning, it’s the Game Of Thrones Theme on Eight Floppy Disk Drives. 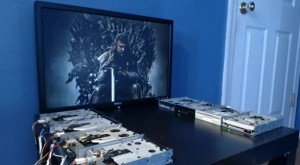 Nothing like combining a great series and its music with some retro geekery via the use of Floppy discs as instruments.  As you know I talked about picking this up on Blu-ray as an awesome deal; you can still get it for a bit more.  There is also the soundtrack from Amazon

Quite impressive what creative individuals are able to accomplish!

"120 MW of Distributed Solar Power or 8.8 Billion Liters of Clean #Water or The… http://t.co/qmmRFfim #acyberfellow" — ACyberFellow