FireEye Advanced Threat Report for First Half of 2012 [Cyber Warfare] 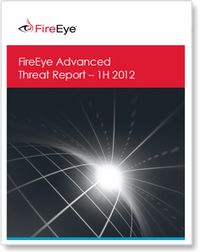 FireEye, Inc. has released its Advanced Threat Report for the First Half of 2012 and the findings aren’t in your favor.  Unfortunately the trend of the attacker getting stronger - defenses getting weaker has continued.  The main report consists of 5 overall findings which are quite alarming:

FireEye is the leader in stopping advanced targeted attacks that use advanced malware, zero-day
exploits, and APT tactics. The FireEye solutions supplement traditional and next-generation firewalls,
IPS, anti-virus, and gateways, which cannot stop advanced threats, leaving security holes in networks.
FireEye offers the industry’s only solution that detects and blocks attacks across both Web and email
threat vectors as well as latent malware resident on file shares. It addresses all stages of an attack
lifecycle with a signature-less engine utilizing stateful attack analysis to detect zero-day threats. Based
in Milpitas, California, FireEye is backed by premier financial partners including Sequoia Capital, Norwest
Venture Partners, and Juniper Networks.

are there any solutions for cyberwarfare in 2012, fireeye cyber war