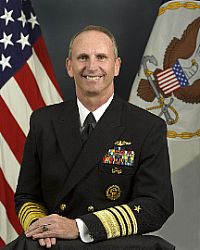 “Project Power Despite A2/AD Challenges. Potential adversaries are mounting strategies to prevent U.S. forces from entering their theater (anti-access) or operating effectively once within the theater (area-denial). These adversaries intend to prevent U.S. forces from defeating their aggression or coming to the aid of allies and partners. Both state and non-state actors are undertaking these strategies using capabilities including mines, submarines, anti-ship cruise and ballistic missiles, anti-satellite weapons, cyber attack, and communications jamming. The Navy FY2013 budget submission addresses these threats through a wide range of investments that support the multi-service Air-Sea Battle concept. In addition to the MIW, ASuW and ASW investments identified above, our FY2013 budget submission funds upgrades in electronic warfare (EW), integrated fire control, cyber operations, networks, Virginia SSN and payload modules, and the F-35C.”

“Operate Effectively in Space and Cyberspace. As a forward deployed force, our Fleet is highly dependent upon space-based systems, cyberspace and the electromagnetic spectrum. Naval forces rely on long-haul communications for command and control, positioning, navigation and timing and administration. Given the growing A2/AD threat from communications jamming and anti-satellite weapons, our FY2013 budget submission includes investment in the maritime portion of the Joint Airborne Layer Network, a UAV-based system to assure our ability to communicate and conduct command and control.”

And there is even a note on the CARL VINSON (in good company with CONSTITUTION) from SECNAV Mabus:

“Our commitment to our sailors and Marines can never waver. It can never end. For 236 years from steam — from sail to steam to nuclear, from the USS Constitution to the USS Carl Vinson, from Tripoli to Tripoli, our maritime warriors have upheld a proud heritage, protected our nation, projected our power, and provided freedom of the seas. In coming year, this new strategy and our plans to execute that strategy will assure that our naval heritage not only perseveres, but that our Navy and Marine Corps continue to prevail.”