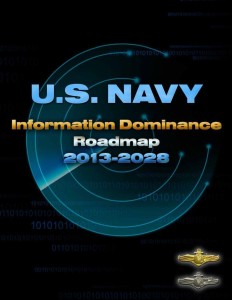 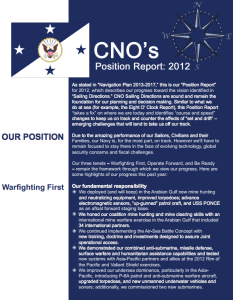 As stated in “Navigation Plan 2013-2017,” this is the CNO’s Position Report for 2012.  It describes the U.S. Navy’s progress toward the vision identified in the CNO’s Sailing Directions. The CNO Sailing Directions are sound and remain the  foundation for planning and decision making. Similar to what the USN does at sea (for example, the Eight O’ Clock Report), this Position Report “takes a fix” on where the Nay is today and identifies “course and speed” changes to keep it on track and counter the effects of “set and drift” – emerging challenges that will tend to take the USN off track.

The main points are aligned with the CNO’s Tenets from his Sailing Directions.

Warfighting First - We will develop strategies and capabilities to command the sea and project power. As described in our Air-Sea Battle Concept we will enhance enduring U.S. advantages and create new ones to overcome threats to our freedom of action and exploit our adversaries’ vulnerabilities.

Operate Forward - We will ensure the ability of our forces to sustainably operate forward at the maritime crossroads with relevant warfighting capability.

Be Ready - We will continue to focus on the proficiency and confidence of today’s fleet with today’s systems and weapons, while addressing factors that detract from safety and readiness.

We have already seen movement on this position report with the deployment to the Western Pacific of the USS FREEDOM; much work remains in the area of sexual assault and suicide. 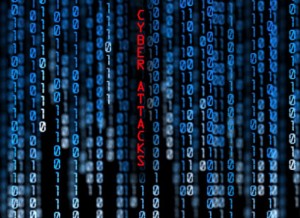 Cyberwarfare (Cyber War Definition or Cyber Attack Definition - sometimes written in error as Cyber War Fare) can be defined as actions by a nation-state to penetrate another nation’s computers, networks, and information systems for the purposes of causing damage or disruption.  This damage and destruction can range from tactical to strategic impacts.